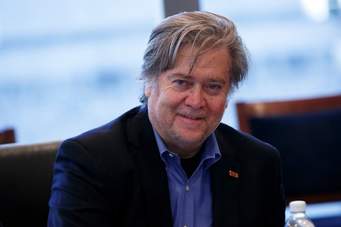 Born and raised in Virginia, Steve Bannon became a naval officer before finding success in entertainment finance. After creating a series of politically charged documentaries, in 2012, he took over as executive chairman of the conservative Breitbart News Network. Named CEO of Donald Trump's presidential campaign in August 2016, Bannon served as a senior counselor to the president following Trump's Election Day victory, before returning to Breitbart in August 2017. In October 2019 he launched a new radio show called “War Room.” "War Room" appears to be gaining steam as a safe space for the far right. It’s routinely among the most popular podcasts on Apple’s platform and streams live twice each weekday and once every Saturday through the Real America’s Voice network.